Jamie Furlong is an SCDTP-funded PhD candidate in Social Statistics & Demography. His PhD is on relationships between population change and electoral voting in the UK. Other research interests include European demography and population processes, analysing neighbourhood-level ethnic and social changes, and how and why people vote for certain political parties.

Doing a PhD is often talked about as a lonely experience of long days staring at a computer screen in a windowless office. Whilst the bleakness of such descriptions is somewhat exaggerated, there are many difficult periods where it can feel as if there is little reward for all of the slogging. So, when the DTP offered the chance of a largely funded, impact-themed trip to Iceland at the end of summer last year, it was the perfect opportunity to instil some fresh ideas in a beautiful country far away from the office.

The word beautiful here is certainly not an exaggeration. After flying out several days before most of our colleagues, a friend and I rented a car and explored the Snæfellsnes peninsula. Despite what could only be described as a calamitous experience wild-camping on the shoulder of a mountain in abysmal wind and rain, the surreal natural landscape was the perfect way to relax after a difficult few months of working.

On returning to Reykjavik, we met the other PhD students and were ready to learn about the connections between academia and policy in Iceland. The key question behind most of the week’s academic events was ‘how does academic research inform policy in Iceland?’ The focus would be two-sided, looking both at the ways in which social scientists collaborate to achieve policy outputs and the ways in which politicians and public/charity sector workers make use of social scientific research. This was supplemented with tourist activities in Reykjavik and beyond.

On the academic side, we had an interesting panel meeting about achieving impact through research with three academics at the University 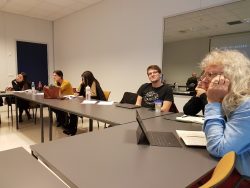 of Iceland. Here, it became clear that in a country with a small population, it is much easier to achieve mainstream impact on the basis that there are few academics in the same sub-field of research. For example, the political scientist – an expert on small states – mentioned that he regularly receives phone calls from Icelandic news channels to talk on anything from Donald Trump to Brexit – topics that are far removed from his expertise!

Visiting the National Youth Council of Iceland we learnt about the ways in which they make use of political research in order to understand the barriers to political engagement amongst young people. This research had inspired them to conduct mock Icelandic elections and find innovative means by which to put young people’s issues in Iceland on the national agenda.

Research is also fundamental to the Icelandic police and their ability to control crime across the country. At a talk by the National Police Commissioner of Iceland, she explained the importance of sociological research that gave them better insights into the causes of crime. Particularly interesting was their openness to international research, gaining insights from research in other Nordic countries in particular. These studies, she explained, go on to inform the education and training that police officers in Iceland receive.

At the City Hall, we had a question and answer session with Pirate Party representatives for Reykjavik. For me, this was quite inspiring, as they explained the ways in which they routinely bridge the pragmatism of their work with what is often perceived as abstract academic research. For example, they made regular use of the ideas of urbanist Jane Jacobs’ and referenced concepts such as Henri Lefebvre’s ‘Right to the city’ when identifying the importance of addressing urban sprawl and car-dependence in Reykjavik.

On top of cramming in academic-related activities, we were also tourists in Iceland. Two completely different highlights stand out. First, on the Golden Circle tour, we watched geysers erupting, walked among hot springs and felt the immense power of the Gullfoss waterfall dropping into a 62-metre deep canyon. Second, being invited to Viktor’s (a current PhD DTP-funded student) family home where we were cooked a delicious dinner and witnessed a live karaoke punk show from Viktor’s parents who formed the first punk band in Iceland!

Overall, Iceland was a fascinating case-study, not simply because of its beauty, but because with such a small population, the gaps between academia and public policy that might be seen in larger countries with bulging civil services were simply not present. While achieving impact in the UK context may be more complicated, it was inspiring and encouraging to hear the many ways in which academic research has contributed to public policy.